EX-SUS-GDR Drill Reduces Cost per Part on Stainless Steel Exhaust Header
Darrel McCoy, District Manager
The 41st Annual Barrett-Jackson Auction located in Scottsdale, AZ. is no ordinary auction. It is “The World’s Greatest Collector Car Events™,” which captures the essence of a passionate obsession that collectors and enthusiasts share throughout the world. I was fortunate enough to attend the auction where I saw lines of gorgeous vehicles and watched a $50,000 bid shoot up to $250,000 in 30 seconds, all for a used car!
Many of the high performance vehicles displayed in the auction had employed the exhaust manifold design, also known as the exhaust header design, for car tuning. Exhaust headers are one of the easiest ?bolt-on? accessories? for improving? engine ?performance because they make? it easier for? the engine to? push exhaust? gases out of ?the cylinders. Most headers ?for naturally aspirated? engines are ?manufactured ?in mild steel, while headers for turbo charged engines, on the other hand, are often manufactured in 304 Stainless Steel. 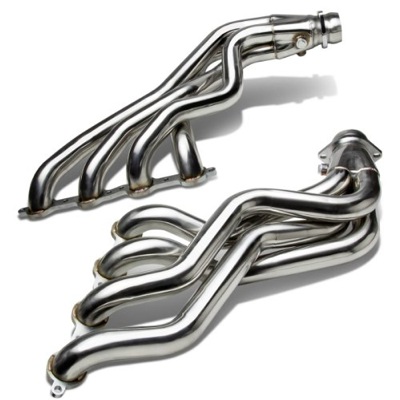 Recently, one of my customers from Las Vegas, NV, who is a header plate manufacturer, called regarding a drilling operation in 304 Stainless Steel. He had been using standard cobalt drills but was not able to produce a good hole and had encountered some abnormal sound during the operation. To solve the problem, the customer had to pay to water jet at $40 ?per part. Not only were they losing money, they also had to extend their lead-time by using an outside vendor.

After a careful examination of the application, I recommended OSG’s EX-SUS-GDR drill from the EX-GOLD® series. OSG’s EX-SUS-GDR drill is manufactured from premium high-speed steel, ideal for stainless steels, mild steels and aluminum alloys. The addition of OSG’s TiN or TiALN coating improves wear-resistance and prolongs tool life.

During the first test, the EX-SUS-GDR drill also encountered the abnormal sound, producing a long thick chip and breaking after the second hole. I was concerned with the chip formation while the customer was concerned with the sound, breakage and no parts. I knew that once we had the chip formation under control, the sound and tool life would increase. So, starting off slow, we increased the 10 mm EX-SUS-GDR drill to 480 RPM with 0.009 IPR. With these simple adjustments, we were able to produce 120 holes and finish the job with no trouble whatsoever.

At the end of the day, this customer was not only able to produce holes efficiently and effectively, but they also eliminated the need to utilize an outside vendor, reducing lead-time and cost per part.

The success of large auto events like the 41st Annual Barrett-Jackson Auction depend on having consistent, working parts in all of their cars. By using our EX-SUS-GDR drill combined with the right cutting tool strategy, our customer was able to produce parts more efficiently, allowing them to continue to supply cars with headers that hold up under the spotlight.